The conference registration fee allows admission to all conference sessions. CMS members should log into the website prior to registering to obtain the member rate.

The Pacific Northwest Chapter of The College Music Society is pleased to announce its 31st Regional Conference on April 27–28, 2018, at Washington State University in Pullman, WA.

The Program Committee welcomes proposals for demonstrations, lecture-recitals, panels, papers, performances, posters, and workshops from CMS student members that relate to all aspects of music creation, performance, scholarship, teaching, learning, career considerations, and other areas of interest to the music profession.

The Program Committee solicits the broadest representation of topics within our profession, including global musics, new technologies, popular genres, innovative teaching models, multidisciplinary issues, cross-cultural perspectives, history, analysis, career issues, influences of race and gender, and pedagogy, especially the transmission and acquisition of music in formal and informal settings in different cultures. Proposals that tie into the national topic “Diversity and Inclusion” are particularly encouraged. The Committee welcomes proposals from undergraduate and graduate students from all educational institutions.

The Primary proposer must be a current member of The College Music Society. Persons interested in submitting a proposal should check their membership status well in advance of the submission deadline. Please note the processing time for membership applications and/or renewals is 1–2 business days.

A maximum submission of TWO proposals per person is allowed.

Questions regarding this call should be directed to:
Sophia Tegart, Program Chair, 2018 CMS-PNW Regional Conference

You must be a CMS member to submit a proposal.
Please log in and the 'Submit' button will appear in this location. Or, click here to join CMS. 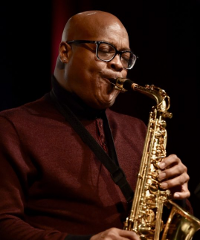 Horace Alexander Young, is one of a select group of “triple threat” recording and touring artists who is equally gifted as a multi- instrumentalist (woodwinds, keyboards and percussion), vocal musician and as a highly skilled composer/arranger. Although originally trained in college primarily as a classical flutist, his studies in saxophone were approached as a dual emphasis and his subsequent professional career has reflected this as well.

Mr. Young previously served as Chair of the Contemporary Music Program at Santa Fe University of Art and Design (Santa Fe, NM) and Interim Director of Jazz Studies at Texas Southern University -where he conducted the Texas Southern Jazz Experience Big Band and The Joe Sample Jazz Orchestra (with Artist-In-Residence, Joe Sample). Prior to those appointments, he taught on the music faculty at Washington State University (1998-2008), Rutgers University and Sonoma State University.

In addition to maintaining an active performing and recording schedule, Mr. Young is in constant demand as an adjudicator and as a guest performer for numerous festivals and schools throughout the USA, Canada and abroad. He also performs as a sideman with noted recording artists and as a leader of his own group.

Questions regarding this conference should be directed to
Sophia Tegart, 2018 CMS-PNW Program Chair