Publications in this series provide for the college music profession and music community at large perspective on and insight into the breadth of cultural inclusion in a wide variety of musical works. 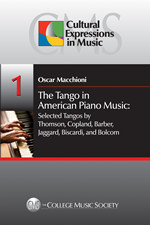 In this inaugural volume, Dr. Oscar Macchioni elucidates with native fluency and expert pianistic insight the influence of Argentine Tango in the piano works of six American composers: Virgil Thomson, Aaron Copland, Samuel Barber, David Jaggard, Chester Biscardi, and William Bolcom. The Tango in American Piano Music is at once vivid and erudite, and makes an important contribution to the literature for scholars and performers. 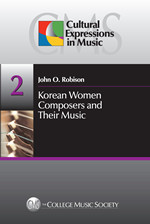 The College Music Society is pleased to present the second volume of the Cultural Expressions in Music monograph series. In this second volume, Dr. John O. Robison provides the most comprehensive information available on the lives and music of forty-two of the world's most significant Korean women composers born between 1931 and 1971. Through biographies and musical analyses, Korean Women Composers and Their Music makes an important contribution to our understanding of these important composers, one that will be equally beneficial to scholars, composers, and performers. 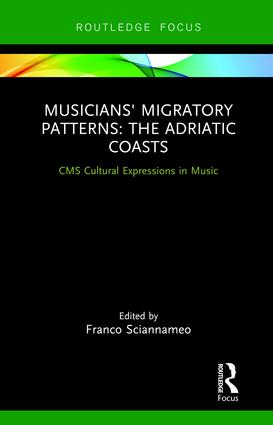 Musicians’ Migratory Patterns: The Adriatic Coasts contains essays dedicated to the movement of musicians along and across the coasts of the Adriatic Sea. In the course of this book, the musicians become narrators of their own stories seen through the lenses of wanderlust, opportunity, exile, and refuge. Essayists in this collection are scholars hailing from Croatia, Italy, and Greece. They are internationally known for their passionate advocacy of musicians’ migratory rights and faithfulness to the lesson imparted by the history of immigration in the broadest of terms.

Spanning the Venetian Republic’s domination, the demise of the Ottoman Empire, the European nationalistic movements of mid-nineteenth century, the shocking outcomes of World War One, and the dramatic shifts of frontiers that continue to occur in our time, the chapters of this book guide the reader on a voyage through the Adriatic Sea—from the Gulf of Venice and the peninsula of Istria, to Albania, the Island of Corfu, and other Ionian outposts.

Musicians’ Migratory Patterns: The African Drum as Symbol in Early America questions the ban that was placed on the African drum in early America. It shows the functional use of the drum for celebrations, weddings, funerals, religious ceremonies, and nonviolent communication. The assumption that "drums and horns" were used to communicate in slave revolts is undone in this study. Rather, this volume seeks to consider the "social place" of the drum for both blacks and whites of the time, using the writings of Europeans and colonial-era Americans, the accounts of African American free persons and slaves, the period instruments, and numerous illustrations of paintings and sculpture.

The image of the drum was effectively appropriated by Europeans and Americans who wrote about African American culture, particularly in the nineteenth century, and re-appropriated by African American poets and painters in the early twentieth century who recreated a positive nationalist view of their African past. Throughout human history, cultural objects have been banned by one group to be used another, objects that include books, religious artifacts, and ways of dress. This study unlocks a metaphor that is at the root of racial bias—the idea of what is primitive—while offering a fresh approach by promoting the construct of multiple-points-of-view for this social-historical presentation.

Musicians’ Migratory Patterns: American-Mexican Border Lands considers the works and ideologies of an array of American-based, immigrant Mexican musicians. It asserts their immigrant status as a central force in nourishing, informing, and propelling musical and artistic concerns, uncovering pure and fresh forms of expression that broaden the multicultural map of Mexico. The text guides readers in appreciation of the aesthetic and technical achievements of original works and innovative performances, with artistic and pedagogical implications that frame a vivid picture of the contemporary Mexican as immigrant creator in the United States.

The ongoing displacement of Mexicans into the United States impacts not only American economic conditions but the country’s social, cultural, and intellectual configurations as well. Artistic and academic voices shape and enrich the multicultural diversity of both countries, as immigrant Mexican artists and their musics prove instrumental to the forming of a self-critical society compelled to value and embrace its diversity. Despite conflicting political reactions on this complex subject of legal and illegal immigration, undeniable is the influence of Mexican musical expressions in the United States and Mexico, at the border and beyond.