It is no secret that our world is becoming toxically noisy. People like to make a lot of noise. In fact, for some musicians, producing a huge sound is a goal in itself. But at what cost?  Like overuse syndromes, the vast majority of hearing loss problems are cumulative. Unlike overuse injuries, hearing loss is permanent. Musicians cannot afford any hearing impairment. It is of the utmost importance for us to protect our ability to produce our art and to be able to interact with our world

Too Loud (and Too High), Too Close and Too Long

Noise-induced hearing loss is a combination of your exposure time, the noise level, the peak level, and your proximity to the sound. Orchestras are loud and often reach damaging decibel levels. Any exposure above 125 dBA, even for seconds, is risky. Many of us are unaware that devastating and painful hearing injuries can also occur due to loud sound.

Ms. Horvath will discuss the risk factors and provide prevention strategies. Find out how to protect yourself, prevent life-changing hearing injury, and learn how to advocate for a safer workplace. 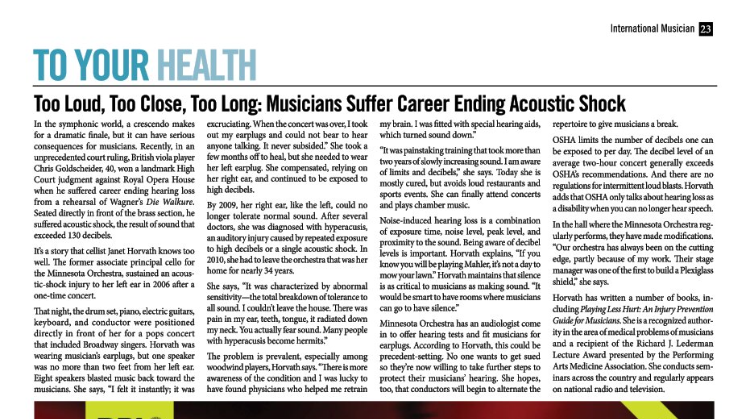 Janet Horvath, the Minnesota Orchestra’s associate principal cello from 1980 to 2012, is a lifelong performing classical musician, soloist, and speaker. She earned her master’s degree in music performance from Indiana University. Since leaving the orchestra, Janet has focused on her writing and recently completed her MFA in creative writing, (November 2017), from Hamline University, Saint Paul, MN.

Horvath is the author of Playing (less) Hurt—An Injury Prevention Guide for Musicians published by Amadeus Press (Hal Leonard Performing Arts Publishing Group), and is considered a pioneer and authority in the area of the medical problems of performing artists. Initially self-published, her book won a gold medal at the 2009 IPPY awards

After more than thirty years as a performer, and as an arts and injury prevention advocate, Janet is well-known among both amateur and professional musicians, teachers and students, and health care providers. She has presented injury prevention seminars for professional and student orchestras including the San Francisco Symphony, Utah Symphony and Boston Symphony Orchestra, and at colleges, conservatories, and conferences from coast to coast. Her appearances on national radio and television include Terry Gross’ Fresh Air on NPR, The Woman’s Connection [watch video] and Athletes and the Arts [click on ‘Articles’ to watch videos].

Numerous magazines have published her articles, including The Atlantic, Strad, Strings, and the International Musician, and she is a regular contributor to the classical music site www.interluude.hk

Her teachers have included distinguished professor Janos Starker, and her father George Horvath.