All conference events will take place at Cornish College of the Arts, in the historic Kerry Hall. 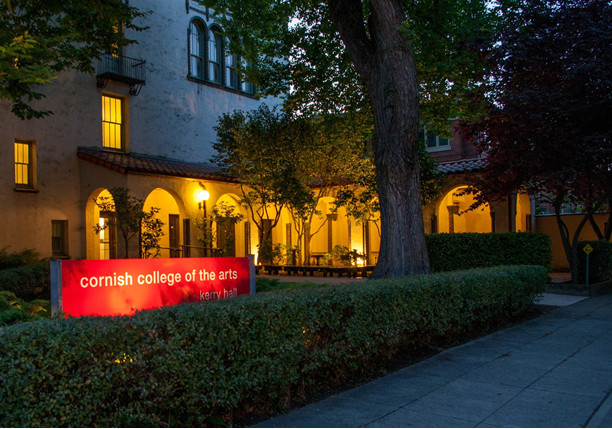 Kerry Hall, constructed in 1921, was the first full-time home for Cornish College. Founded by Nellie Cornish in 1914, Cornish was built on the foundation of progressive and interdisciplinary teaching in music, and a true synthesis of all the arts. John Cage first invented the prepared piano and constructed Imaginary Landscape No. 1 in this building. Cage began his life-long collaboration and relationship with Merce Cunningham in this building. In 1935 the first college-level school of radio broadcasting was initiated, on the site that now houses condos just north of the building. Nellie Cornish was a progressive thinker whose goal was to bring together the arts in an interdisciplinary relationship. She and those administrators who followed brought many thinkers and teachers together in this building, including Mark Tobey, Martha Graham, Julian Priester, and many more.

Regular and timely consideration of the structure, content, and process of undergraduate music studies is healthy for students and faculty alike, particularly when attention can be given to  student interests and needs and the realities of the musical worlds in which they will live and work. Despite music’s centrality to civilization, the core aspects of undergraduate music programs typically remain insulated from relevance to issues arising from a shrinking global society, technology’s influences on every aspects of our lives, and growing tensions associated with demographic and economic divides.  This talk follows on the dialogue initiated seven years ago by a task force of eight college and university music faculty, all members of The College Music Society, across dimensions of artistic practice, pedagogy, scholarship, leadership, and innovation. The group’s recommendations, in their Manifesto of a three-pillared pathway of creativity, diversity, and integration, were revealed, responded to, and enacted upon. Still, the work is ongoing as to how the Manifesto’s pillar points, particularly in the way of creativity, diversity, and integration, can shape a more relevant education for undergraduate music majors who will graduate into the working world of musicians in our many-splendored society.

Patricia Shehan Campbell is Donald E. Peterson Professor of Music at the University of Washington, where she teaches courses at the interface of education and ethnomusicology. A singer and pianist, with studies of the Japanese koto, Celtic harp, Karnatic Indian mridangam, and Bulgarian and Wagogo song, she has lectured internationally on the pedagogy of world music and children’s musical cultures. She is the author of Music, Education, and Diversity: Bridging Cultures and Communities (2018), Songs in Their Heads (1998, 2010), Teaching Music Globally (2004), Lessons from the World (1991), Music in Cultural Context (1996), Musician and Teacher (2008), co-author of Music in Childhood  (2017, 4th edition) and Redefining Music Studies in an Age of Change (2017), co-editor of the Oxford Global Music Series and the Oxford Handbook on Children’s Musical Cultures (2013). Campbell is recipient of the 2012 Taiji Award and the 2017 Koizumi Prize for work on the preservation of traditional music through educational practice. Chair of the Advisory Board of Smithsonian Folkways and educational consultant in the repatriation of Alan Lomax recordings to the American South, she is editor of the seven-volume Routledge World Music Pedagogy Series (2018-2020).

Seattle has many lodging options, both close to Kerry Hall and many more downtown. We are recommending two options for lodging that are both walking distance to Kerry Hall. The first is the Silver Cloud Hotel  (the hotel address is 1100 Broadway, Seattle, WA 98122). The second is The Bacon Mansion Bed and Breakfast (959 Broadway E, Seattle, WA 98102).

The area around Kerry Hall is one of the oldest and most vibrant neighborhoods in Seattle. Two favorite haunts (very close by) are:

Around the corner from the Deluxe is Broadway Avenue - filled with bars, restaurants, and coffee shops. We encourage you to explore Broadway and enjoy its eccentric, old-Seattle vibe.

Each participant will receive a discounted ticket to a concert by the Seattle Modern Orchestra on Friday March 27, which will include the world-premiere of a new work by Huck Hodge, and works by John Cage, Kate Soper, Steve Reich, and Tom Baker. More info about this program may be found here.