The hotel is within walking distance to the Buchanan Center for Performing Arts.

Rate
The discounted conference room rate is $102 for a standard King (2 people) or Queen/Queen (up to 4 people) plus applicable state and local taxes.

* Breakfast is not included, but there is a nice restaurant with lovely breakfast buffet on the premises.

Reservation Deadline
The deadline to reserve rooms at the conference rate is Wednesday, February 26. Rooms within the reserved block will be sold on a first-come, first-served basis. CMS cannot guarantee rooms at the conference rate once the room block has been sold; thus, participants are encouraged to reserve well in advance of the final cutoff.

Be Aware of Scams!
Booking a guest room using the above method is the only reservation method guaranteed by the hotel to result in an actual booking. Please be aware that phone and email scams exist which target conference attendees, and that neither the hotel nor CMS have authorized any third-party agents to represent them in booking rooms for guests.

Laramie is accessed easily by flying directly into the Laramie Regional Airport (LAR) on United Airlines, or it is a 2.5 hour drive from Denver International Airport (DIA). Groome Transportation provides shuttle service from DIA to The Hilton Garden Inn.

The Johnson County (Wyoming) Cattle War of 1892 was one of the most bitter of the North American range wars. The presentation will begin with a brief historical overview of the conflict itself and the sociopolitical conditions leading up to the hostilities. Several Johnson County War ballads will be examined: “The Ballad of Nate Champion” (Anonymous, 1890s) and “The Invasion Song” (Anonymous, 1890s), “The Murder of Tisdale and Jones” (Patrick Burns, 1892) and “Johnson County War” (Chris LeDoux, 1989). Two poems which may have also been sung, “Our Heroes’ Grave” (Anonymous, 1890s) and “Midsummer Dream.” (Anonymous, 1890s) will be considered. The presentation will contain song texts and music, when available, excerpts from field interviews with descendants of participants in the conflict as well as selected photographs from the author’s collection. 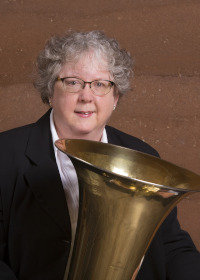 A Wyoming native, Ariel Downing earned her Ph.D. in musicology at the University of Colorado at Boulder. She holds a Bachelor of Music degree from the University of Wyoming and a Master of Music from Colorado State University. Ariel’s doctoral thesis, Music in Cowboy Culture of the Powder River Basin, Wyoming, is concerned with perception of cowboy-western music by society at large, the musical traditions among ranch folk of the Powder River Basin and the impact of mass culture on their lives.

Ariel is currently an adjunct instructor at Sheridan College in Sheridan, Wyoming, where she teaches classes in music education and music history. She also teaches band in grades 5-8 at Holy Name Catholic School in Sheridan. Ariel plays trombone and tuba in orchestras, bands and jazz ensembles in Wyoming and Montana. She has performed with the New Sheridan Cornet Band in reenactments of the Buffalo Bill Wild West Show. Ariel serves as the coordinator for the annual Tuba Christmas performances in Sheridan and also performs regularly with the Highland Flute Quartet.

Ariel was inducted into the National Society for Leadership and Service in 2016. She was awarded the National Federation of High Schools Teacher of the Year award for the state of Wyoming during the 2003–2004 academic year. Students at Big Horn High School nominated her for inclusion in Who’s Who Among America’s Teachers in 2002 and 2005.

With the support of the Sheridan Arts Council, Ariel has been Folklorist-In-Residence in the Sheridan County schools. She was a guest speaker and panel discussion participant at a conference of rural music scholars in Boulder, Colorado in August 2000.

Ariel has published compositions for choir, concert band, brass quintet, flute quartet and jazz combo. She has published several articles in both popular and scholarly periodicals, on topics ranging from women in jazz to music in the context of contemporary ranching culture, historical music in Wyoming and of course cowboy songs.

World-class guitarist JIJI presents a solo concert on the campus of the University of Wyoming! March 27, 7:30pm  Buchanan Center Concert Hall  (This is the same building as the conference events)

You can purchase your ticket here, and it will be held at the Box Office under your name:
https://www.uwyo.edu/fineart_ticket/tickets.aspx?EVENT_ID=518&EVENT_DETAIL_ID=861

Applauded by the Calgary Herald as “…talented, sensitive…brilliant,” JIJI is an adventurous artist on both acoustic and electric guitar, playing a wide range of music from traditional and contemporary classical to free improvisation. Her impeccable musicianship combined with compelling stage presence and fascinating repertoire earned the Korean guitarist First Prize at the 2016 Concert Artists Guild International Competition.

The Kansas City Star described JIJI as “A graceful and nuanced player,” adding that “…she presented an intimate, captivating performance” in reviewing her recent concerto debut appearance with Kansas City Symphony. A major highlight of her 2018-19 season is her Carnegie Hall/Stern Auditorium debut as soloist with the award-winning New York Youth Symphony, performing the world premiere of a new concerto written for JIJI by American composer Natalie Dietterich.